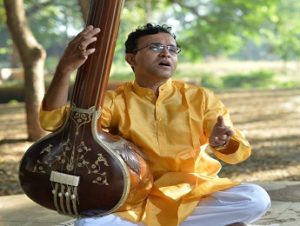 Pritam Nakil a passionate performer and a Guru holds Masters in Classical Vocal from Lalit Kala Kendra (University of Pune) under the tutelage of Guru Pandit Vijay Sardeshmukh (disciple of legendary Pandit Kumar Gandharv).
Pritam’s foundation was laid by none other than Sangeet Natak Academy award winner Pt. Neralkar, famous Khayal vocalist in a gurukul system in Aurangabad. He is currently
under the guidance of the living legend, internationally acclaimed Dr.Smt. Alka Deo Marulkar, a acclaimed exponent of khayal and thumri.
He honed his skills in various aspects of music such as aesthetics, criticism, history of music and applied music along with research terminologies. In addition he gained immense exposure to some profound ideas in music, such as Layicha barik vichar (detail thought
process behind rhythm) perfection of swara and Kumar Gandharva’s musical heritage. His ability was recognized very early on and he has been honored with several awards and  accolades throughout his career. With a natural aptitude and single minded devotion to
master the art of music, Pritam has blossomed into an accomplished vocalist. He has made several notable performances in India and in the United States of America.Besides performing the art of Hindustani Classical music, he is a devoted teacher. His students have garnered appreciation and accolades for various levels of performances. His goal is to make significant contribution to the art form by passing it on to the younger generation.
Currently,working as a assistant professor of music at KTHM college Nashik
Performances:

He has performed in many places across India and the globe.To name a few, Indian classical vocal in Rotary International Conference held in Falmouth, Portland USA 2010, Yashwantrao Pratishthan Nariman point Mumbai, Sahitya Sammelan held in Karhad,Maharashtra and Deval Club Kolhapur.

Achievements and Awards
He was awarded Junior Research Fellowship by cultural ministry of Government of India
for year 2014-15.The research project is titled ‘The study of Dhunugam ragas'
discovered by Pt. Kumar Gandharv. Pritam was selected as a delegate from India to United States of America in a study exchange program. Visited various music schools and colleges in the state of Maine and New Hampshire, performed and delivered lectures on Indian Classical music. The tour was organized and sponsored by Rotary International in May 2010. He has received numerous awards in various competitions and festivals all over India.