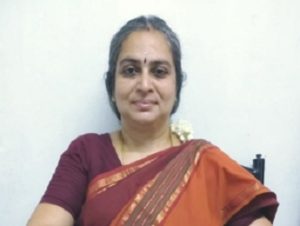 Smt. Sripriya is a carnatic vocalist from the music capital of India, Chennai. She started her musical journey at the age of eight under the able guidance of Chembai Sri. Late Anandan (nephew/disciple of chembai Vaidhyanatha Bhagavathar).
As she grew and her quest for knowledge increased, she was further nurtured and guided by Srimathi Sridevi Padmanabhan (Disciple of Sir late D.K.Jayaraman), Padma Shri Late. Srimathi. Mani Krishnaswamy. She has specialised in Koteeswaraiyer kritis under the astute eyes of Sri.S.Rajam (Winner of Sangeet Natak Academi Award) . She has accompanied her Guru Smt. Mani Krishnaswamy on many concerts.
She is currently receiving guidance from Srimathi.Sankari Krishnan (disciple of Sri. Late. Lalgudi Krishnan)
Backed by M.Com., PGDCA., M.A(Music), she was a recipient of central govt scholarship in the year 1990. She is also AIR B-high grade artist.
Awards and performances:
Recipient of prizes in almost all the Sabhas in Chennai during Dec season between 1987-1991
Recipient of Rajaji Tambura in 1990 from Tamil Isai Sangam.
Performed in all the Sabhas in Chennai till 1994 and from 2000-2003.
She has performed in Sydney and Melbourne music festivals (during her stay in Australia from 1994-2000).
Teaching Experience:
Smt Sripriya has totally devoted herself to teaching carnatic music. She is a Guru with a vast experience in teaching. She has taught Carnatic music to all ages in Australia and is currently teaching Carnatic music online for students from India and abroad.