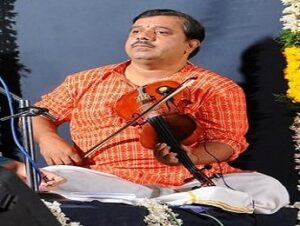 Shri KR Suresh began his journey in music at the age of eight under the guidance of his mother Mrs. Andal who is also a carnatic singer. Later, he trained under Guru Shri. M. Murugaesan who is a well known violinist in Chennai and a staff of ALL INDIA RADIO.

After his schooling Suresh decided to join the Tamil Nadu Government Music College in Adyar, Chennai. He was also trained by T. N. Krishnan and Kamala Sharma. He has a Diploma in Music along with the title "ISAI KALAIMANI".

He was also associated with his uncle, Mr. V. K. Venkatramanujam,a Reader in Benaras Hindu University at VARANASI and Violin Maestro Shri. M. Chandrasekar for not only training but also for guiding him in the right direction in this journey.

His contribution was by choice and not by chance that he chose to play violin as  a freelancer alongside Bharatanatyam, Mohiniaattam and Kuchuppudi dancers in various concerts for the past 32 years. He has accompanied dancers like Dhanajan, Suryanarayanan, SamyukthaVaradharajan, UmaraniKannan(Re - Union) and Dr. Geetha Uphadyaya in Bradford, London, New Zealand etc.