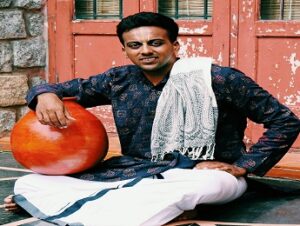 “Ghatam, the clay pot instrument, is used to depict the rhythm in Carnatic music. It has found one of the most skilful musicians” - S. Krishna
Krishna trained under the Ghatam Vidwan (legend) V Suresh, was about 7 yrs old when he saw his Guru playing the instrument and was fascinated to learn it. As he began his journey, he attended various concerts and could grasp the finest of nuances, which enabled him to get on to the stage very early on. He has also been guided by doyen T.H Vinayakram.
During 2006,  he gave his debut performance (Arangetram) under the able guidance of his Guru. Since then there has been no looking back. Known as Ghatam Krishna, he has been playing alongside Mridangists of various styles, accompanying both vocal and instrumental music.
In his fifteen years of experience on stage, his Ghatam has taken him to venues of great importance across India and to mention a few nations such as USA, Australia, Europe, Bangladesh, and Sri Lanka.
Krishna has received awards from prestigious forums and continues to offer his skilful percussion acumen coupled with his musical imagination. He has been accompanying TV Sankaranarayanan, Neyveli Santhanagopalan, Bombay Jayashri, Abhishek Raghuram, Ranjani-Gayatri, Sikkil Gurucharan, and Gayathri Venkataraghavan in their concerts across the world namely Poland, Singapore, Australia, Switzerland, Geneva and Lausanne.
“Dumroo”, a percussive ensemble is an initiative Krishna has started along with a few fellow percussionists.
Apart from his performances, he has been a passionate Guru as he guides his students the art of Konnakol and Ghatam.