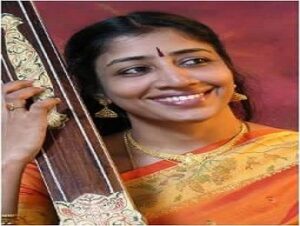 Born in a family of teachers of high repute, Sankari Krishnan attributes her interest in music to her parents, Shri S. Maniam and Smt Seetha Maniam who encouraged her to pursue Music as a profession.
Sankari Krishnan did her B.A( Music) at Seethalakshmi Ramaswamy College, Trichy and M.A. M.Phil (Music), from the University of Madras, (a gold medallist)
She was initiated into music at Thiruvanaikoil, Trichy by Shri K.S.Subramanian, his encouragement had fired a passion in Sankari to pursue music as a career. While doing her post graduation in Music in Chennai, she had the good fortune of becoming a disciple of one of the greatest maestros of all times, Padmabhushan Lalgudi Shri G.Jayaraman. This privilege continued uninterrupted for more than twenty years until the great Guru left his mortal coils. She has been fortunate to absorb his music and become a responsible torch bearer of the great Lalgudi bani. She is an "A" Grade artiste of All India Radio, Chennai.
Sankari has also learnt “COMET – Correlated Objective Music Education Training” from Dr Karaikudi S. Subramanian, Director, Brhaddhvani.

Many awards to her credit: