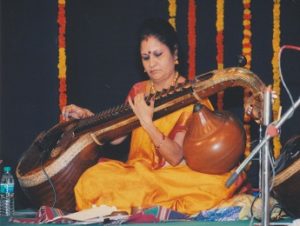 Smt. Radha is an extremely accomplished and renowned musician and Veena Vidushi. Radha was born into a family of musicians – her father Shri NRP Sarathy was a disciple of none other than the renowned flautist TR Mahalingam!
Having started her musical journey at a tender age of 7, under the tutelage of Saraswathula Lakshmi Kumari, she rapidly came to grips with the complexities and subtle nuances of carnatic music and the challenges of gaining control over the veena. She built up an impressive repertoire of ragas and krithis and by the age of 12 she presented her first concert at the famous Kakinada Sri Rama Samajam. She also won the first prize in the inter-collegiate competitions in Andhra University. Shortly thereafter, she repeated such a stellar performance by grabbing the gold medal in a similar competition in the Venkateshwara University!
Ever since, she’s presented numerous concerts at various cherished venues including the Tirupathi Brahmotsavams and Annamacharya Utsavams, Narada Gana Sabha, and the Nadotsavam at the Art of Living, Bangalore.
In addition to her constant involvement in concerts and other engagements, Smt Radha has been a dedicated guru – over an extended period of more than 3 decades, she’s trained numerous students with the utmost dedication and diligence. The school she founded, Omkaarini Sangeetha Pathashala, has provided fundamental as well as advanced training to numerous students over the years!
She has the distinction of being recognized and rewarded the Outstanding Young Person title by the Rotaract Club way back in 1983! She is also the recipient of a gold medal from the Visakha Music Academy.
Even amidst her engagements as a performing artiste and the demands of being a guru to numerous disciples, Smt Radha acquired an M.Phil degree in music from the prestigious Sree Padmavathi Music University, Tirupathi.
SmtRadha’s proficiency as a veena player is amply testified to by numerous events by her accompanying the legendary Dr. Mangalampalli Balamuralikrishna in live concerts as well studio recordings. And by the acclaim she got from luminaries of the dance and music world such as Dr. Vyjayanthimala Bali, renowned veena vidushi E. Gayathri