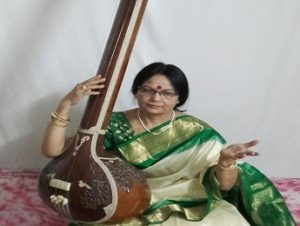 Smt. Malobika Mandal stepped into the melodious world of music at very early in life. Blessed with an inborn talent for music she completed her training, by securing a master degree, SANGEET ALANKAR, in classical vocal music from Akhil Bhartiya Gandharva Mahavidyalaya Mandal. Her persistent effort and the passion for her subject led her towards the intensive classical training under the renowned guru late Shri Satyen Das of Kolkata. Striking the right balance between academics and music, Smt. Malobika Mandal, (also a science graduate) then persuaded a diploma in Najrul Geeti and Rabindra Sangeet from the Bangiya Sangeet Parishad, Kolkata
She had the opportunity to showcase her versatile singing prowess and enthrall audience all across the globe. Her singing repertoire including Classical, Semi classical and light music.
Malobika, a graded artist of All India Radio is the disciple of renowned vocalist Padmashree Vidushi Sumitra Guha of Kirana Gharana (Disciple of Pt. A T.KANAN and Vidushi Malabika Kanan). Under her tutelage she got an opportunity to learn the nuance of Kirana Gharana Khayal Gayaki.
Malobika further honed her semi classical music (Thumri, Dadra, Kajri, Chaity) from Smt.Parul Banerjee, a noted Vocalist and a disciple of Vidushi Naina Devi.
Her quest of versatility also encouraged her to study the singing style of  Geet, Gazal, and Bhajan from Pt. Mahindra Sarin a top grade composer of All India Radio.

Keeping in mind the objective of passing on the knowledge she has acquired over the years to the next generation. She is also guiding students and consistently on the lookout and explore avenues to popularize Indian Classical music in the next generation.