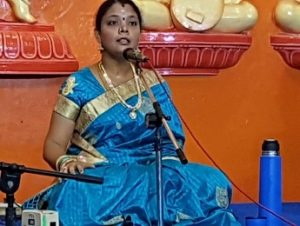 Smt. Gayathri Karthick is a Carnatic Vocalist, residing in Singapore. She hails from a highly respectable and musically inclined family. Her father Shri. K.Sivaraman is a well-known Carnatic violinist and classical music composer. Her uncle Ghatam Maestro Shri. “Vikku" Vinayakram, is a "Padmabushan" awardee and Grammy Award Winner.She underwent Carnatic tutelage under Shri. Mahesh Vinayakaram (son of 'Padmabushan' Shri. “Vikku" Vinayakaram). She further nuanced under the able guidance of the legendary Carnatic vocalist Smt.Suguna Varadachari.Currently she is a Carnatic Music tutor at Sri Senpaga Vinayagar Temple.

ACHIEVEMENTS
Gayathri Karthick started giving stage concerts way back in 2007. She has given many concerts at temples, sabhas, in Chennai till 2010.She successfully toured Europe and South East Pacific region along with renowned accompaniments. She participated and won in many popular TV shows such as Raagamaalika (featured in Sun TV). She was one of the semi-finalists in EnnoduPaattu Paadungal (featured in Jaya TV).Gayathri received a special mention from veteran cine playback singer S.P. Balasubramaniam Sir during a TV show. She has to her credit of rendering a Tamil Devotional album titled "AMBIGAIYE UMAIYAMBIGAIYE" along with her Guru Mahesh Vinayakram. The CD received tremendous response in Europe. She is the core member of a Fusion Music band 'Trisatya' - a collaborative effort with renowned musicians in India. Gayathri Karthick has conducted vocal workshops for students in association with legendary musicians in India. She recently had a privilege to perform for our Honorary Prime Minister Shri.Narendra Modi, during the unveiling ceremony of Mahatma Gandhi Ji's plaque held in Singapore during July 2018. TEACHING CAREERGayathri Karthick got initiated into teaching from 2011 and associated with Shri ShenpakaVinayakar temple, Singapore as a Vocal Tutor. She started her journey as a music teacher with 3 students. With her immense dedication, friendly yet Guru- Shishya sampradaya pattern, she now has around 80+ students learning Carnatic Vocal/bhajan under her tutelage. She has nurtured her students and made them participate in many competitions, temple concerts/slots over the past 3 years.