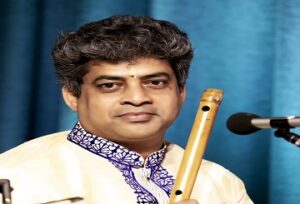 An ace performer and an enthusiastic Guru, Shri V K Sivakumar compasses an experience of 25 years as a carnatic musician.
He started his musical journey at the young age of  12 from Guru Smt. Sundari. During his later years, he joined the music college and completed his graduation in the year 1992. He came under the guidance of the legendary Gurus Shri R Thyagarajan and  Padmashree Dr  N Ramani in the year 1991.
He has given numerous solo performances for more than two decades.He has been most sought after accompanist for many renowned and legendary Bharatanatyam artists, namely Chitra Visweshwaran, Urmila Sathyanarayanan, V.P. Dhananjayan, K.J. Sarasa, Radha aunty, Shreejith Krishna, Shreejith Nambiar and more.To his credit  he has been accompanist for more than 500 Bharathanatyam Arangetrams till date.

Abroad:
As a faculty in Singapore Indian Fine Arts Society, Singapore from 2007 to 2018 where he taught  about 60 students.

The first Flute Arangetram by a Singaporean, was his disciple in SIFAS  during 2015.

Performed as Accompaniment with Bharatanatyam dancers in following Countries: