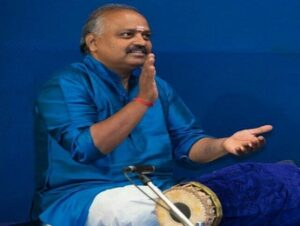 Shri Nagai Narayanan was born in a family of musicians and had his initial training in music from his mother Smt. N S Rajam one of the first female mridangist.His journey with mridangam and the world of rhythm started  at the tender age of 8. He later trained under the able guidance of Mridangam Srimushnam Shri V Rajarao from the year 1978 to 1985.

Has accompanied mridangam for the students Smt Uma Anand for close 20 years now.

He is now under intensive training from Guru Shri  Karaikudi R Mani.

He has  a “B High” grade  from the A I R and has dedicated himself to teaching and performing  the art of rhythm both nattuvangam and mridangam for the past 30 years.