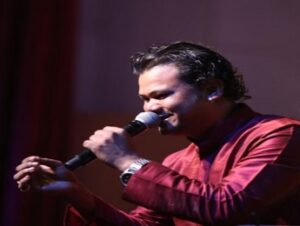 Keshab hails from a small village Itapara, Gohpur (Assam), from childhood he was passionate towards the folk music of Assam. His parents used to sing lokgeet and old Assamese and hindi melody songs in evening mehfils,which kept him inclined towards music.

He got introduced to classical music  while he  was in 12th,when he participated in a Assamese lokgeet competition and was appreciated by Shri Biju Kumar Ramchiary, his first mentor who advised him to learn Indian classical music and encouraged him to train under him.

Keshsab trained under Shri Nand Banerjee of Guwahati for a while. During his Visharad he came in contact with Shri Basant Kumar Saikia, an examiner from Bhatkhande university. That was the turning point in Keshab’s musical journey, which took him to Lucknow for advance training in the gurukul setup. After getting Bachelors in Music from Bhatkhande university under the guidance of Shri Nand Banerjee, he went to Mumbai for advanced vocal training under Shri Suresh Wadekar.

He has 15 years experience in vocal training. He mainly focuses on voice control, voice dynamics, voice modulation, proper breathing management in a scientific way. He is a music composer and guitarist as well.

He has  performed more than 2000 shows in different parts of India  and in Indonesia, Bali and South Korea. On 29th February 2020 he performed with A R Rehman and has performed for more than 50 shows for Indian Army band Ekamsatt.