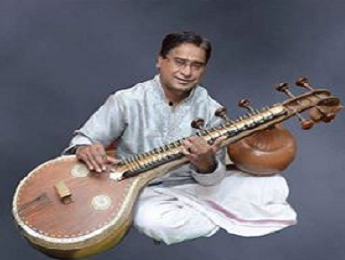 Born into a musical family, Murthy had a natural flair for carnatic music from a very young age.
His father Late Sri.G.K.Ramachandran was an “A” grade artiste from AIR. He had initial training from Smt.Jayalakshmy at Bangalore. Later on he came under the tutelage of Mysore C.Krishnamurthy of Bangalore.
When his family moved to Madras he continued under Kalaimamani Sri. G.N.Dandapani Iyer,  for more than a decade. Dandapani iyer inculcated into him the nuances of blending subtle ghamaka and plain notes and strict adherence to classical style. He has also had vocal training from his father and Shri S.Rajam. His style of playing indicates a unique synthesis of Mysore  and Tanjore styles with a strong undercurrent of  vocal style.
Murthy has the capacity to seamlessly shift within various genres of playing without compromising on the grammar and orthodoxy. With more than twenty five years of solo experience behind him he has found his niche in various forms like dance recitals, instrumental duets, Veena Venu Violin  trio,  fusion and other musical ensembles. He is also adept in playing the veena as accompaniment for several vocal artistes. His playing is marked by gentle plucking and graceful yet firm gliding over the frets and resemblance to vocal singing which is known as vainika gayaki style.
He was awarded BEST INSTRUMENTALIST SUB SENIOR CATEGORY by the prestigious MUSIC ACADEMY OF MADRAS during the December 2014 music season.

Murthy has been giving public performances for the last 25 years. Performances are under various categories:

Conferred Asthana Vidwan of the Kamakoti Peetham Sankara Mutt of Kanchipuram from the year 2008.