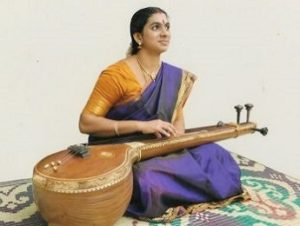 V. Sumithra (Sumithra Vasudev), classical Carnatic vocalist and disciple of renowned musician Sangita Kalanidhi Vidushi Smt. R. Vedavalli, has been performing in the field of music for nearly two decades. Even at the age of five her passion for the art was recognized and nurtured by her grandmother, Smt. Janakam Chari, and her parents, Smt. Padmaja and Sri. R. Vasudev. Later, at the age of eight she started her training under Smt. R. Vedavalli.
Training under her in the Gurukula style of learning has given Sumithra the good fortune of moving very closely with her Guru, through which she has imbibed the rich tradition and style that marks Smt. Vedavalli’s music. Sumithra’s music stands out for its classicism and depth, while emphasizing manodharma within the specified lakshana. Niraval and Vrttam singing and Ragam Thanam Pallavi rendition are special areas which portray her own style as well as her great lineage.
Sumithra has been performing from the age of eleven. One of her first performances was for the ‘Spirit of Youth’ festival of the Music Academy where her concert was adjudged as ‘The Best Concert’ and she won a prize for it. She is an A grade artiste of the All India Radio. She performs regularly in India and abroad. She is a recipient of the title of “Yuva Kala Bharati” and the Ustad Bismillah Khan Yuva Puraskar National award from the Sangeet Natak Akademi, among many other titles and awards. She has released many thematic CDs and cassettes apart from live and studio concert recordings.
In addition to being a performing artiste and active researcher of music, Sumithra has a deep interest in language and literature, particularly in Samskritam and Tamil. She has set to music many slokas and verses from classical and modern Sanskrit literature and has popularized them through presentations and demonstrations in various musical and Samskrita gatherings. The Nalayira Divya Prabandham in Tamil is of special interest to her. She has presented exclusive Divya Prabandha concerts and has tuned and accompanied her Guru in CD renderings of the same. She has also learnt the art of Harikatha from veteran exponent, Kalyanapuram Shri. R. Aravamudan.
Married to Sri. Vijay Madhavan, who is a disciple of renowned Bharatanatyam artiste Padmashri Smt. Chitra Visveswaran. He is a recipient of the title of “Yuva Kala Bharati”. He performs regularly at various festivals, and has been performing at the Bhagavatha Mela for nearly two decades. He runs a dance school, “Rechita Nrityalaya”, where he trains students in the classical Bharatanatyam style of dance.