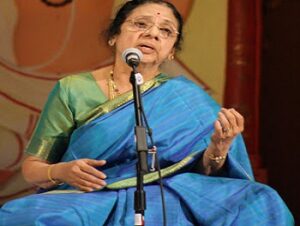 Dr. Nirmala Sundararajan, 73, born in Erode, Tamil Nadu, and raised in Chennai, is a leading exponent of Carnatic music, and holds a PhD in the art form. To Nirmala, music has occupied an integral part of her very being. The accomplished musician that the Carnatic music connoisseur sees in her today is the result of decades of dedicated pursuit, which has gone beyond a mere interest in achieving competence to perform concerts to an endeavour to master the myriad subtleties that make Carnatic music great and beautiful.

Nirmala’s idealistic aim at maintaining the glorious traditions of Carnatic music has been nurtured and enriched by several Gurus under whom she has the good fortune of training. These have included M.S. Soundarammal of Tanjore, Shri Ramnad Krishnan, Shri PN Raghava Rao, Smt. T. Muktha and Sangitha Kalanidhi Shri T.M. Thiagarajan. Nirmala holds a B.A. in Music from Madras University and a doctorate from the Indira Kala Sangit Vishwa Vidyalaya, Khariaragarh, Chhattisgarh, completed under the guidance of Mr. S.R. Janakiraman.

Nirmala has chiselled her music into an amalgam of all the fine qualities that she has imbibed from her teachers. She is blessed with a charming voice and an expressive free flowing style that places emphasis on the sensitive and subtle technical aspects of concert singing. Her music possesses the uncommon quality of serenity and grace and she has, in addition to the kritis of the Musical Trinity and other ancient and modern composers in her repertoire, mastered an impressive collection of Padams and Javalis. She learned many of these Padams and Javalis directly from Smt. T. Muktha, who was a scion of the Veena Dhanammal Family reputed for their expert knowledge over Padams and Javalis. Nirmala, as a result of her learnings, can do justice to both the technical and aesthetic aspects of delivering a Padam.

Apart from being a professional “A” grade artist of the All India Radio, Nirmala has to her credit hundreds of concerts given all over India, besides two broadcasts over the BBC, London and a concert for the London Tamil Sangam. Nirmala has also toured the United States several times and has consistently performed at the Tyagaraja Aradhana in Cleveland. Besides concert performances, she has also rendered a number of lecture-demonstrations on Padams and Javalis and Divya Prabhandams in Pittsburg, Chicago and Sacramento. She has also conducted workshops on compositions of various composers in Sacramento and Charlotte.

Nirmala has received several awards for her expertise in Carnatic music. These include, among others, (1) the Fellowship of Government of India, Department of Culture, 1989/1991, (2) the title of Sri Hastigirinatha Gana Kokila from Tatadesikar, Tiruvamsasthar Sabha, Kancheepuram, (3) the title of ‘Nadakanal’ from Nadakanal- Subramanya Bharati Festival in 2004, (4) the Sangita Sironmani—Prajahita Seva Samastha Sabha—Chitoor, Andhra Pradesh in 2008, (5) the Sangita Kala Jyothi – Suswaraa (Academy of Music of Dance) in 2009, (6) the Sangita Sevamani – 2010 – Sri Kanchi Kamakoti Trust (Sankara Mutt, Kanchipuram, (7) the Acharya Ratnakara in 2012 from the Cleveland Tyagaraja Aradhana, USA, (8) T. Mukta Memorial Award in 2014 from Chennai Fine Arts, (9) Gana Kala Siromani – Manargudi Sambasiva Bhagvatar Memorial Award in 2014 from Tyagaraja Vidwath Samajam, and (10) Devakottai Narayana Iyengar Memorial Award in 2015 from Hamsadwani.

Today, Nirmala divides her time between rendering concert performances and lecture demonstrations and teaching assignments. She is presently engaged as a lecturer and teacher at the Music School, Vani Gurukulam at Vani Mahal, Chennai run by Sri Tyaga Brahma Gana Sabha (From 2010 onwards). As head of the school, she has trained more than 30 students at an advanced level. She has also completed teaching assignments at the SV Temple, Pittsburg, U.S.A. between June and September 2004 & 2005, apart from conducting workshops, lecture demonstrations and concert performances in a number of cities in the U.S.A.

Nirmala’s music is a fine example of a perfect amalgam between all the essential qualities that make Carnatic music an aesthete’s delight.